Skip to main content
Quorn
Quorn Vegan Pieces & Nachos 3 out of 5, 1 based on 6 ratings

A great dish to share as a starter or as a main meal, prepare to get messy!

Ingredients for the Nacho Sauce

Ingredients for the Mushroom Fry 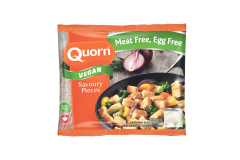 Made with Vegan Pieces

Quorn Pieces with Tagliatelle and Artichoke

Looking for some inspiration?

Arugula-based pesto creates a deliciously fresh base for this light pasta dish that is perfect for warm summer...

A simple recipe that transforms Quorn fillets into a flavour packed dish thanks to a crunchy topping of fresh herbs,...

Quorn Pieces with Tagliatelle and Artichoke

Try this light pasta dish with Quorn meatless Tenders and artichokes for a quick Italian-inspired dinner ready in...

As if pizza wasn’t delicious enough on its own, it’s made even better by topping it with Sloppy Joe-style Quorn...

Save the equivalent in carbon emissions to 20,000 boiling kettles by swapping beef to Quorn Mince, once a week for a year

When you visit our website, we use cookies, which are small pieces of information that allow us to maintain your connection to our website. These cookies are not used to collect or store any personally identifiable information.